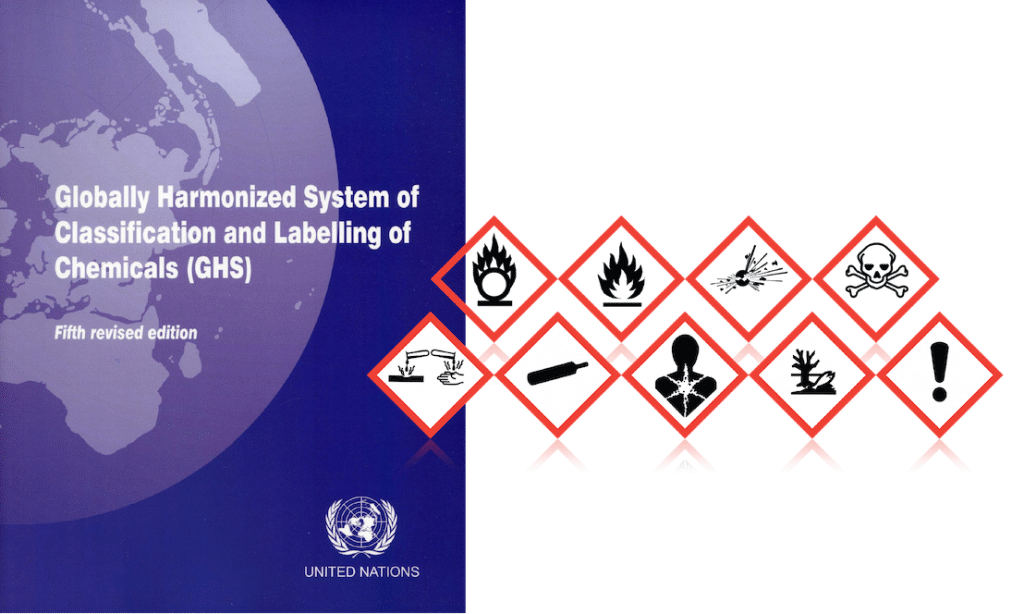 By law, all Material Safety Data Sheets ((M)SDS) should have been converted to the GHS format by June, 2015. The goal is to make the handling and transportation of chemicals safer and easier with a structured set of uniformed guidelines.

Quantum is here to help companies make a smooth transition to GHS compliance if you are still working towards it. Contact our experts today to learn more about the MSDS to SDS conversion service!

The United Nations (UN) adopted the Globally Harmonized System of Classification and Labeling of Chemicals, known as GHS, in 2003. According to GHS standards, hazardous chemicals must be given GHS labels detailing their contents and precautions. The full text of the GHS can be found on the United Nations’ website.

In 2009, OSHA aligned its Hazard Communication Standard (HCS) with GHS regulations, meaning that all chemicals in the United States must follow these same rules. The OSHA GHS standard has been in place since then, but recent changes to GHS labeling requirements mean that all old MSDSs must be converted to a new format by 2015.

These changes include, but are not limited to:

GHS also specifies elements are required to appear on certain chemical labels. For example, depending on the toxicity of a chemical the pictograms and hazard statements may not be necessary. For all chemicals, regardless of toxicity or hazards the product identifiers, precautionary statements, and suppliers information are all required. You can learn more about how GHS is maintained and updated here.

What Are The Changes?

The main changes to the GHS are as follows:

Many of these changes fall under the overall 16 section format of the new GHS SDS requirements. The sixteen sections, in order, are:

There are two sets of GHS hazard pictograms: one for transport of dangerous goods and one for workplace labeling/hazard warnings. Within the latter, there are three kinds of pictograms: physical hazards, health hazards, and environmental hazards. All of these are covered under section 2 of the new SDS requirements.

The signal words and phrases also relate to this hazard classification. They explain the pictogram and also give an idea as to the potential severity of the substance or mixture based on its reactions to a number of environments.

By December of 2013, employers should have trained their employees on new GHS SDS regulations. This includes an overview of the general format of the labels and how they should be read and integrated fully into already running company operations.

It should be noted, however, that the Globally Harmonized System is not perfectly standardized across all countries, and so the actual practices for label creation and SDS conversion or production may vary. For example, in the United States, the Occupational Safety and Health Administration’s Hazard Communication Standard (or HCS; the US’s comprehensive legislation regarding GHS hazard labels) does not enforce sections 12-15 of GHS SDS regulations, leaving these under the jurisdiction of other government agencies.

A comparison of the information in the MSDS and the new requirements in the 16 sections of the GHS SDS can be found here.

What Do You Need To Know About Labeling?

Labeling is one of the most important part of the GHS format. With the GHS hazard labels in place, employees will be able to determine the potential dangers and precautions needed to use a chemical easily. The label will also be the main source of information for customers, who may not already have easy access to safety data sheets (SDSs). The GHS standards have been designed so that they can communicate information in a universal way, using symbols and language to convey hazards quickly and easily. Here are the things that you should know about the labeling requirements.

Within the new GHS OSHA labels, every hazardous chemical will be marked by hazard symbols, signal words, and hazard statements. All of these elements of the chemical safety labels have been standardized for every hazard class. Each company has the opportunity to include supplementary information, such as their company’s name or address, including things that have not yet been integrated into GHS regulations and those that do not interfere with hazard classifications.

The hazard symbols, or pictograms, have a black symbol on a white diamond with red outlines. The black symbols will each be syndicated with the GHS hazard class, and will include special indicators for harmful chemicals. Signal words such as “Warning” and “Danger” emphasize the relative severity of the chemical within, which is determined by GHS hazard class. There is typically no more than one signal word on a label. Hazard statements, one-sentence descriptions of the dangers of a substance, are also dependent on hazard class.

There is a designated labeling process for OSHA hazardous chemicals, which can be found in Annexes 1 and 7 of the fourth revised edition of the Globally Harmonized System of Classification and Labeling of Chemicals, found here. The label is made up of hazard symbols, signal words, and hazard statements, listed in that order. The hazard statements define whom or what the substances can cause harm to. Supplemental OSHA hazard and manufacturer information can be added as per supplier discretion if necessary.
OSHA hazard guidelines lay out very specific rules for the allocation of label elements, the full text of which can be found here. It describes the standards for pictograms and hazard statements as described above, adding input as to precautionary standards and GHS hazard classification. Additionally, it describes how to respond in case of contact with hazardous chemicals and prescribes methods for proper OSHA-sanctioned disposal.
Every hazardous chemical must have a proper GHS label, formatted exactly according to OSHA chemical hazard labeling standards.

Various punctuations affect the importance and emphasis of each precautionary statement listed. Supplementary information should be limited, so as to keep non-standardized material to a minimum. The name for each hazardous chemical should be listed alongside the product identifier listed on its GHS safety data sheet.

The information included on the GHS hazard labels is standardized, and its formatting is as well.

What Are The Key Principles? 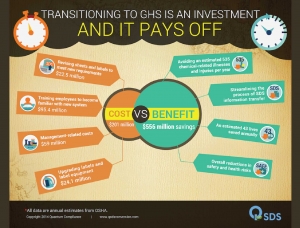 By adopting the Global Harmonized System (GHS), countries are hoping to take advantage of several benefits.  The benefits of globally consistent standards include:

In order to better understand how the conversion to GHS rules will decrease economic investment and increase safety compliance, it’s important to understand the major functions of the GHS. The two major principles of the GHS are:

This lack of global consistency has made it expensive for regulatory agencies and corporations to ensure the safety of employees. Embracing GHS principals will establish a foundation for  compliance and conformity.

What Are The Deadlines?

Know your country’s implementation dates as well those in the countries in which you do business. You can find this information here.

Who Is Affected By GHS?

The real burden of GHS SDS creation falls on the manufacturers. Those companies that create or blend a chemical bear responsibility for its documentation. If you do not create a chemical, you do NOT have to create its SDS. The manufacturers should supply all the chemical’s downstream users with the proper safety data sheets, ideally as early as possible. Those receiving the SDSs are still responsible for implementing them into their systems and making sure all labels are also GHS compliant.

If you are a manufacturer, supplier, or a user of chemicals, you are required to comply with these new directives for the classification and labelling of hazardous materials.  In most cases, this applies to:

If you are not sure if these regulations apply to your chemicals and if you are required to provide a GHS SDS, check the criteria listed in the GHS purple book.  In the U.S. OSHA estimates that 5 million workplaces employing over 40 million workers will be impacted.  A similar impact is expected in other countries around the world.

How Can Quantum Help?

While the transition from MSDS to SDS is generally called a “conversion”, GHS requires more than the simple format change. Most new GHS requirements are foreign to most companies, such as new elements and applying GHS classification of chemicals.

Quantum is able to do the hard work for you so that you will be able to meet those standards with precision. To make sure we get everything just right, we developed and used our own software to determine hazard classifications and other elements within the SDS. We check GHS phrases, physical properties, and hazardous statements associated with each chemical product, among many other things. We also offer services such as template customization and regulatory consulting.

GHS Compliance Doesn’t End at June 1, 2016. The majority of companies continue to work towards it. Contact us now to learn more about your options!

Check out some useful resources: