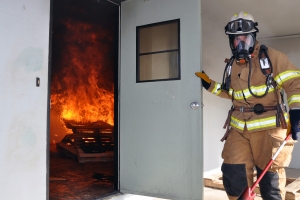 Workplace safety was compromised on two separate occasions August 12, 2015.  The two incidents occurred at a warehouse in Tianjin, China, and at a recycling center in Spokane, Washington.

The exact cause of the chemical explosion in China is currently under investigation, but so far, there are over 100 fatalities and more than 700 injured.  For information on the Tianjin warehouse explosion, read more here.

The other incident occurred when a 55-gallon canister of chlorine gas was punctured at Pacific Steel and Recycling’s site in Spokane, Washington. A chlorine gas cloud was released into the air, immediately overcoming eight workers in close vicinity to the canister.  Approximately 50 workers were on scene at the time of the incident.  Most were treated on site, although 13 workers were transferred to hospitals for further evaluation with eight listed in critical condition.

Exposure to chlorine gas can cause symptoms which range from minor respiratory issues such as coughing to much more severe respiratory issues.  Exposure may also result in burns to the skin and eyes.  Firefighters arrived on scene before hazmat teams arrived.  Upon arriving, Assistant Fire Chief Brian Schaeffer was unaware of the root cause of the incident and what caused the employees to be sick.  It was determined that workers inside the recycling center needed immediate rescue, so commanders ordered firefighters to enter the facility.  Thankfully, there were no reports of injuries to the firefighters.

The bravery and heroism that first response teams demonstrate is nothing less than awe-inspiring.  When an accident occurs and jeopardizes workplace safety, they are the contingency plan.  Transparent communication between businesses working with hazardous chemicals and local emergency response authorities, leads to first response teams knowing how to handle incidents in a safe manner.  Clearly communicating potential hazards is essential to minimize both worker and first responder injuries. Implementing an effective safety program by utilizing a centralized system such as safety software, can greatly improve safety culture within an organization.[/fusion_builder_column][/fusion_builder_row][/fusion_builder_container]