TIANJIN, China – A warehouse owned by Ruihai Logistics (website no longer working) containing hazardous chemicals exploded on 8/12/15 killing at least 50 people and injuring more than 700. Investigation is underway to find the root cause of what led to two massive explosions. According to the China Earthquake Networks Center, the first explosion was equivalent to 3 tons of TNT detonating. It was followed by a second explosion, equivalent to 21 tons of TNT. The explosions registered a magnitude of 2.3 and 2.9 on the Richter magnitude scale respectively.  The second blast was so big that satellites in space picked up images of the sudden flare. 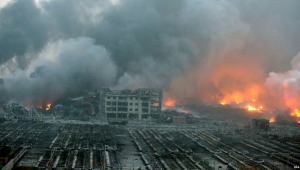 It is still unknown what caused the incident; however, state media reported that firefighters arrived at the port 14 minutes prior to the explosion. The warehouse where the explosions originated was designed to store hazardous chemicals such as sodium cyanide, butanone, and toluene diisocyanate, as well as compressed natural gasses and other flammable materials.

According to the EPA, Toluene dissocyanate is “extremely toxic from acute (short-term) and chronic (long-term) exposures.  Acute exposure to high levels of 2,4-toluene diisocyanate in humans, via inhalation, results in severe irritation of the skin and eyes and affects the respiratory, gastrointestinal, and central nervous systems (CNS).  Chronic inhalation exposure to 2,4-toluene diisocyanate in humans has resulted in significant decreases in lung function in workers, an asthma-like reaction characterized by wheezing, dyspnea, and bronchial constriction.  The International Agency for Research on Cancer (IARC) has classified 2,4-toluene diisocyanate as a Group 2B, possible human carcinogen.”

Chinese authorities have already dispatched a military team of chemical specialists to initiate investigation. Due to the potentially high amounts of hazardous chemicals stored on site, the team is responsible for assessing the root cause of the incident, including the efficiency of Ruihai Logistics’ chemical inventory management system.

Tragic accidents such the explosions in Tianjin are often preventable. Proper investigation, reporting, and corrective action must be performed to prevent future incidents from occurring. Investing in safety saves lives while also saving companies the cost of repairs, the costs from regulatory fines, and the cost of a damaged company reputation.