Quantum has been supplying the paint coatings industry with Safety Data Sheets solutions since 1990. It began working with International Paint (IP)/Akzo Nobel Coatings in 1993 providing (M)SDS authoring software that integrated into IP’s ERP system. With the growth in a global organization there are always customizations that are requested. In this case, IP needed to respond to the needs of the various regions they served while making all data available across the system. This article describes the collaboration between IP and Quantum and how together they developed regulatory reporting solutions that ensured safety, compliance, and greater efficiency. 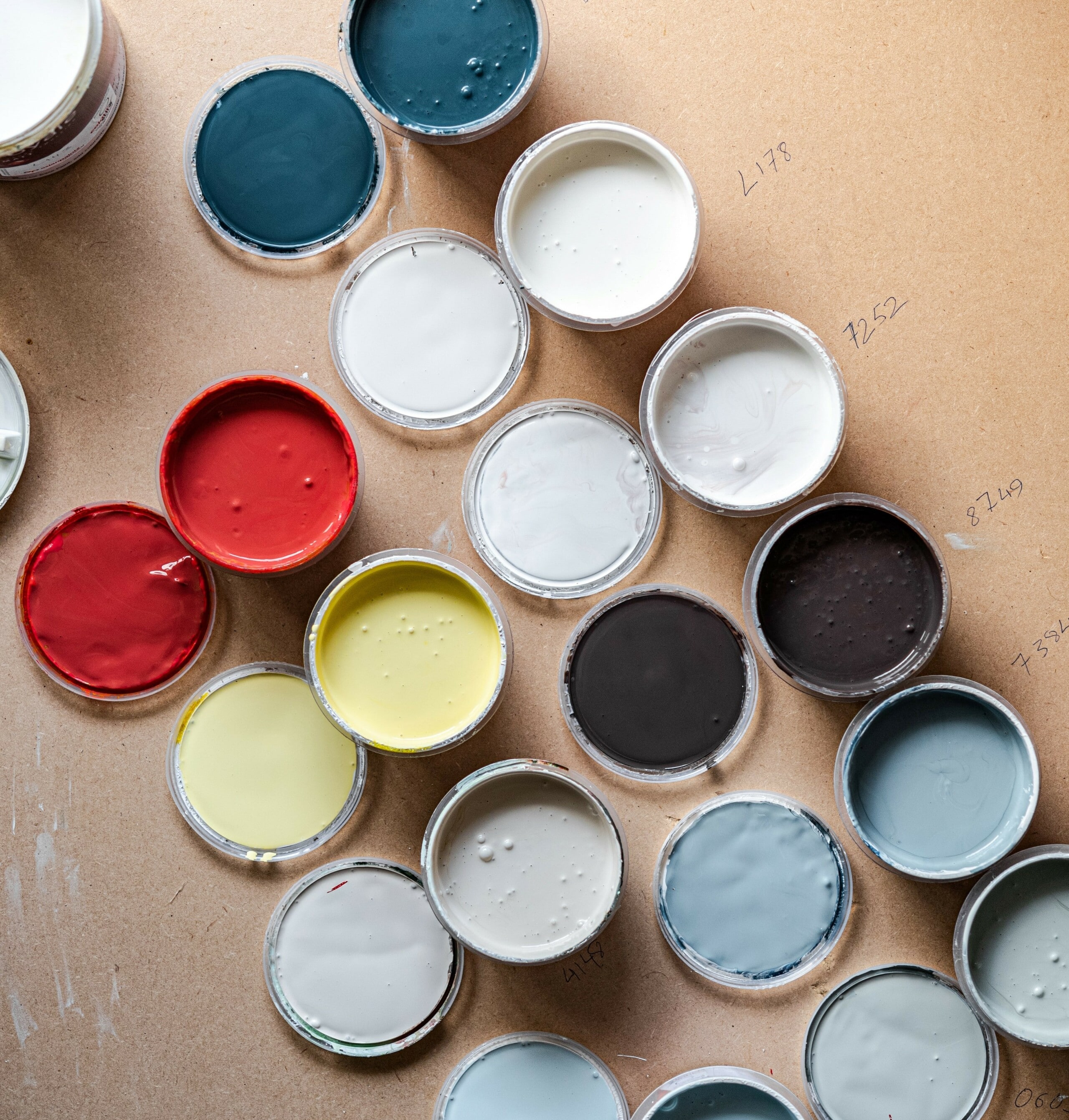 Akzo Nobel Coatings(internationalpaint.com) formerly Courtaulds Coatings, a division of a UK-based chemical multi-national is a self-standing Business-Unit in the Akzo-Nobel Chemicals Group. It has major divisions in pharmaceuticals, fibers, chemicals, and coatings.

The Coatings Group was subdivided into 5 divisions of which the Marine and Protective group is the subject of this article.

The Marine and PC (M&PC) division produces added value coatings for some of the most rugged surface conditions known to man. In order to provide the protection required to combat corrosion, fairly aggressive (chemically speaking) ingredients are necessitated.

This results in products, which usually contain hazardous substances, and therefore regulatory issues are a significant consideration in the business.

Early in the 1990s the then Courtaulds business defined a strategy of a single, integrated package (ERP- Enterprise Requirements Planning) solution based on the following requirements. The solution had to be:

From the short list of 4 ERP options identified, QAD’s Mfg/Pro was selected. Following that strategic decision, the system was implemented in all of the Coatings plants worldwide. There have been several upgrades to the package mainly in the add-on functionality, which has been necessitated due to gaps in the ERP solution or for reasons of added-value to the business (e.g. usability mods or competitive edge mods).

Third Party Software has played a major role where the ERP does not have functionality, in niche applications, such as Health Safety and the Environment (HSE).

The Legacy systems held modules, which were not in International Paint’s ERP, and it was clear that regulatory software for the HSE area was a case in point. IP embarked on a search for a package that could fill the gap. One of the key determinants of the choice was technological compatibility with Mfg/Pros architecture – Progress. Quantum seemed the ideal fit. The major drawback was that as the software had been developed firstly for the North American market, European based legislation did not fit the application.

The functional gap was filled by a commitment by Quantum to develop the rules-based SDS required in the European Community (EC).

Thus began a continuing relationship between IP and Quantum. It has built up in the period since our initial engagement, and during that time, Quantum has continued to develop the package to meet the technological changes facing all software companies where programming, computer power and networking capabilities are improving exponentially.

In addition to the challenge from within the systems world, Quantum has faced the need to develop the software in the light of continual change in business organizations, mainly in the move towards globalization of the supply chain and access to the Cloud.

IP has implemented 3 versions of Quantum’s regulatory module. As mentioned earlier it had to modify the software to comply with European legislation, and to handle multi-lingual printing.

This led to the additional standard functions in the package, which solved these problems. These functions included:

The second major revision to the software coincided with the development by Quantum of their Windows-based version of the FacTS system.

IL worked cooperatively with Quantum to define and develop the new FacTS release, which resolved its business process requirements.

The third major revision to the software was a browser-based Java version. This version offered complete support for all languages, including the “double-byte” languages such as Russian, Greek and the Asian languages.

The Coatings business along with most multi-nationals today, has been adopting and adapting solutions to support Global Supply Chain efficiencies. We can see the effect if we examine one region, the European market, as an example.

The business has attempted to gain economies in several areas by focusing manufacturing in fewer, larger, and more cost-effective locations. To do that successfully the inventory distribution pattern had to be overhauled to concentrate holdings in fewer, larger geographically effective locations. As a result of this direction, IL reduced from 16 manufacturing locations down to 3. A similar reduction in stock holding sites occurred.

The net effect of these changes on the Quantum function was a need to distinguish two types of business – the Supply side (manufacturing and generation of SDS) and the Distribution side (selling sites which need only to print and distribute SDS along with the goods).

The concept can be best expressed in a diagram (see below). 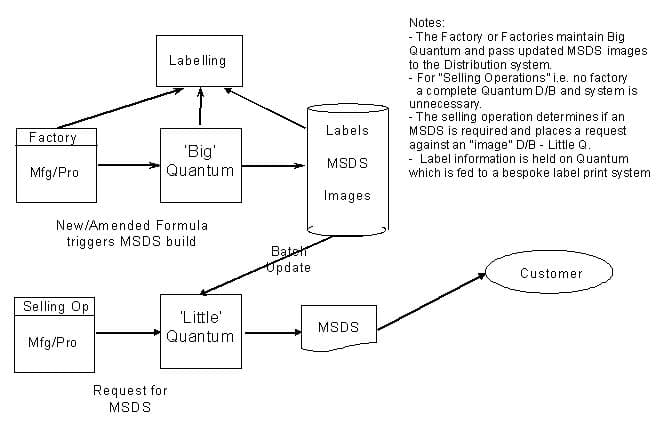 Essentially, we have split the Quantum SDS modules into two independent, but connected parts. The main Part is the Generation engine (Big Q), which concentrates on the SDS life cycle (including activation), which sits in the Manufacturing environment. Secondly, we have the SDS delivery function (Little Q as we term it). The first is largely indistinguishable from the old Quantum as it incorporates all the functions of SDS generation and print. The second part is the innovative part. This is a slave system, which needs only the SDS image and manages the distribution/printing functions of Quantum.

The SDS Author then generates SDS from Q-SDS in several languages and user defined (HTML) formats. These documents are then reviewed, approved, and read back into the database. A nightly transfer of SDS information (documents and support data) is run in batch mode to get new SDS to the “Little Q” distribution databases, and also uploaded to the Corporate SDS web site.

At the distribution sites, sales orders entered into the ERP are transferred to Q-SDS as SDS Request records. (There is also an ad hoc SDS request from the ERP.) The SDS format(s) and language(s) are determined by the client’s “region code”, in this case the country code. The SDS Print Request is then run periodically in batch mode to generate the hard copies of the SDS.

Once completed in Europe, the MFG/Pro-FacTS products have been rolled out to the US (which supports all of North and South America), and Asia Pacific and are in full production. Worldwide, the system is used to produce Safety Data Sheets for 43 countries and in 36 languages.

To learn more about how we can integrate with your ERP, contact Steve Russie, Director of Product Management, Quantum, at steven.russie@usequantum.com.

If you need support with SDS software or services, or a more automated way to manage your chemicals, be in touch with us at Quantum. We’re on mission to help everyone in the chemical industry succeed.

Smart software for a safer world